Walmart Cashier Does Womanand#039;s Nails After She Was Denied Service At The Salon


When a Walmart cashier in Burton, Michigan saw a customer get turned away from the store’s nail salon, she took matters into her own hands.


Tasia Smith works at the Subway inside the Walmart and witnessed the scene.


“Today, this sweet girl went into burton Wal-Mart’s nail salon “Da Vi nails” and they denied her service because ‘she moves too much’,” Smith wrote in a Facebook post. “Out of the kindess of the walmart workers hearts they went and bought nail polish and came into my work to paint this sweet girls nails. They were so patient with her (which she did great, barely moved & was just so sweet)… Thank you to the walmart workers for making this beautiful girls day!”


Smith snapped a photo of Walmart cashier Ebony Harris skipping her break to paint the woman’s nails and posted it on Facebook. 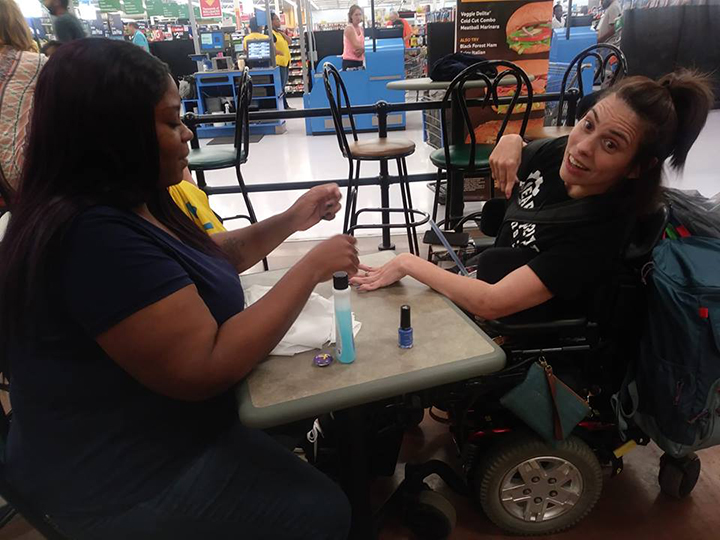 
“I just wanted to post it for awareness and appreciation, because people needed to know what was going on with the business and Ebony deserved all the appreciation she could get,” Tasia told WJRT.


Harris said she watched the nail salon, located next door, refuse to do the woman’s nails because her hands shake quite a bit due to cerebral palsy. So, she decided to do something about it.


“I just wanted to make her day special. I didn’t really want her day to be ruined. That’s why I did it,” Harris said.


“And you know, she moved her hands a little bit and she kept saying she was sorry. And, I told her ‘don’t say that’. I said ‘you’re fine’.”


Harris says she hopes her actions inspire others to treat people with disabilities the way they would want to be treated themselves.


“We’re not trying to bash the nail salon. We’re not trying to make them lose customers, make them look bad,” she said. “But maybe spread awareness that no matter the person, who they are, what color they are, disability, whatever, they’re people too. She’s a girly girl. She’s just like you, me, Tasia, my daughter, anybody. She wants to look pretty, you know, and so why can’t she?”

← Zack Snyder Says Dick Grayson's Robin Was Killed by Joker in the DCEU Warner Bros. Didn't Get Heath Ledger's Joker in The Dark Knight at First →
Do NOT follow this link or you will be banned from the site!