Uber Driver Returns Wallet To Man Who Just Emigrated. The Wallet Had $3,000 In It

Uber Driver Returns Wallet To Man Who Just Emigrated. The Wallet Had $3,000 In It


A Chicago Uber driver has karma on his side after he reunited a passenger who just emigrated with something very precious. 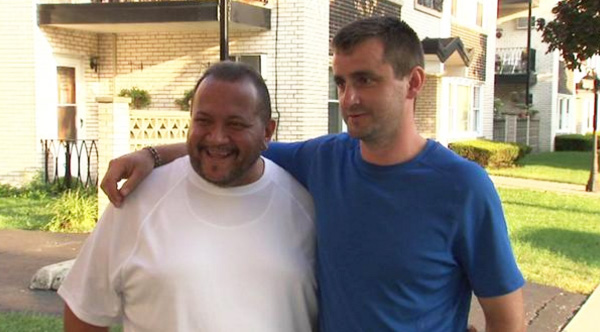 Jose Figueroa (left) and his passenger


Jose Figueroa went to O-Hare International Airport to pick up a man who had just emigrated from Ukraine.


Figueroa took him to a home in west suburban River Grove. Later, he realized the man left his wallet, which has $3,000 inside.


That’s when Figueroa remembered the man said he had sold his business and that cash was all he had.


“I mean there was temptation. I’ll be honest with you. But me being a Christian, I couldn’t. I wanted to make sure I sleep good, so that’s what i did. I returned the money and the wallet,” Figueroa said.


He went back to the home where he dropped his passenger off. The man’s sister was there. When she saw him, she started crying.


They both insisted Figueroa stay for dinner and gave him $100 as a thank you.

← Kanye West: Kim Kardashian Not Posting Nude Selfies 'Would Be Like Adele Not Singing' Kanye+IBk-s Breakdown Is Apparently Kim Kardashian+IBk-s Fault Or Something Now →
Celeb Like