A young Eagles fan who beat cancer got the surprise of a lifetime thanks to the kindness of a stranger. 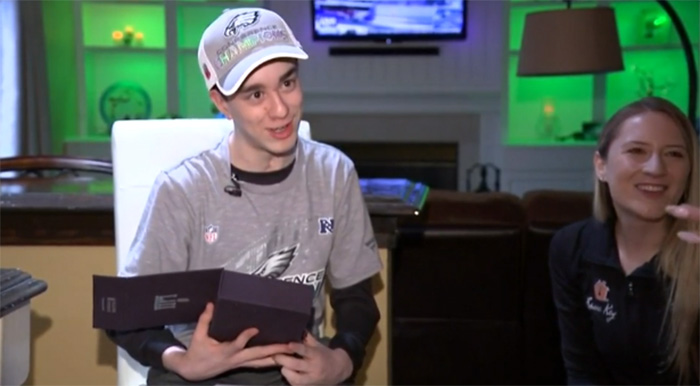 
Cole Fitzgerald, 13, found out on Monday that he will be attending the Super Bowl in Minneapolis.


The man who gave Cole the free tickets is a die-hard Vikings fan and said “There’s no way I can go to the Super Bowl.”


So, he called Spare Key, an organization that helps families in crisis with ill children, and asked them to give his Super Bowl tickets to someone special.


Cole, who lives in Philadelphia, is an eighth grade cancer survivor who battled neuroblastoma since he was 3. Because of his joint underdevelopment, the die-hard Eagles fan never played football, but he is the manager of his junior high football team.


Serie flew to Philadelphia over the weekend with the tickets, and then gave Fitzgerald the biggest surprise of his life.

Watch the video below.

← Bad Boys 3 Finds Its Directors, Targets August 2018 Start Date Groundhog Day Is Returning to Theaters for 25th Anniversary →
Do NOT follow this link or you will be banned from the site!