Due to a flight delay, Brooks Lindsey watched his child enter the world from an airport over FaceTime. 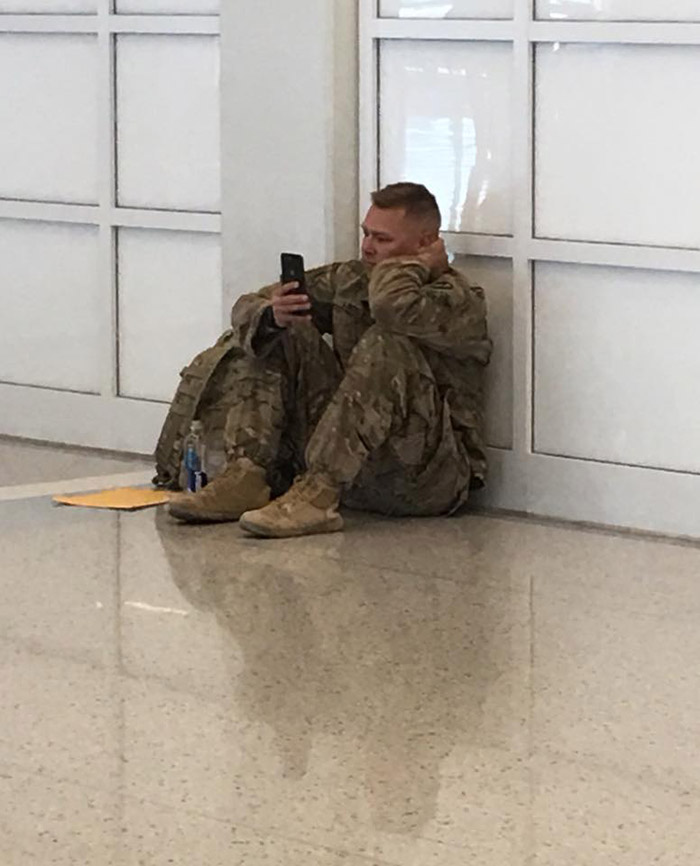 
The heartwarming moment was captured by a fellow traveler on the same flight to Jackson, MS.


“This Army soldier was on my delayed flight home yesterday to MS,” Tracy Dover wrote on Facebook. “He had to watch the birth of his daughter on FaceTime. He was crying and our hearts were breaking. We all gave him space. When we heard the baby cry, we all rejoiced for him. I wanted to share this because I never want us to forget about our soldiers who serve us everyday and the sacrifices they make.”


It turns out the flight delay was a blessing in disguise.


“He called me as soon as that flight landed in Dallas at 2:38 central time and I was 5 centimeters dilated,” Brooks’ wife Haley told Love What Matters. “He was scheduled to take off at 3:55 but LUCKILY his flight was delayed to 5:45. Without that delay Brooks would have been in the air and unable to FaceTime!”


Brooks’ mother secretly FaceTimed her son when Haley began to push. The doctor quickly realized what was going on.


“My doctor told her to pull the phone out and show him what was going on,” Haley recalled. “Brooks was telling me it was okay, and I was doing so good and I heard him wincing and saying ‘wow!’ through my pushes. I could hear people in the airport talking and cheering! Brooks then went on to say that they were making him board and needed to get off as soon as she finally started to crown and all I remember was my doctor screaming ‘Don’t let him board the flight! She’s here! She’s here!’ So, the airport personnel let him sit there and watch till it was over!”


“When he walked in at 7:20 it was just Millie and me,” she said. “He picked her up and held her for five minutes and kept saying ‘wow I can’t believe we just had a baby’.”


Haley says she has received “the sweetest messages” from people who have viewed the photo of Brooks at the airport, which has over 200,000 likes on Facebook.


“We had random people bringing gifts to our rooms and nurses coming in and thanking Brooks for his service! It has been an amazing, emotional time full of so much support!”

← The 2018 Met Gala Was Last Night Met Gala 2018: The Celebrities Who Sat on the Stairs Are a Total Mood →
Do NOT follow this link or you will be banned from the site!